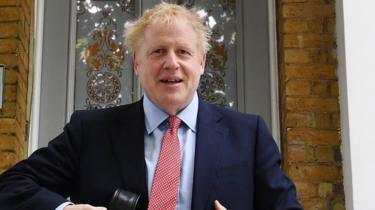 Police were called to the London home of Boris Johnson and his partner in the early hours of Friday after a neighbour reportedly heard a loud argument.

The Guardian said Carrie Symonds was heard telling the Conservative MP to “get off me” and “get out of my flat”.

The Metropolitan Police told the BBC it “spoke to all occupants of the address, who were all safe and well”.

In a statement, it said “there was no cause for police action”. A spokesman for Mr Johnson said: “No comment”.

The Guardian reported that a neighbour had told the newspaper they heard a woman screaming followed by “slamming and banging”.

The paper said the neighbour was inside their own flat when they recorded the alleged altercation.

It said that in the recording – heard by the Guardian, but not by the BBC – Mr Johnson was refusing to leave the flat and telling the woman to “get off” his laptop before there was a loud crashing noise.

Ms Symonds is allegedly heard saying the MP had ruined a sofa with red wine: “You just don’t care for anything because you’re spoilt. You have no care for money or anything.”

‘No offences or concerns’

In a statement, the Metropolitan Police said: “At 00:24 on Friday 21 June, police responded to a call from a local resident in the SE5 area of Camberwell.

“The caller was concerned for the welfare of a female neighbour.

“Police attended and spoke to all occupants of the address, who were all safe and well. There were no offences or concerns apparent to the officers and there was no cause for police action.”

Mr Johnson is the bookmakers’ favourite to succeed Theresa May as Conservative leader and the UK’s next prime minister.

The former foreign secretary and Mayor of London is in a run-off with Jeremy Hunt, with Tory party members to vote over the next month.

Mr Johnson came top in a ballot of Tory MPs on Thursday. The first hustings of the second phase of the leadership campaign takes place on Saturday.