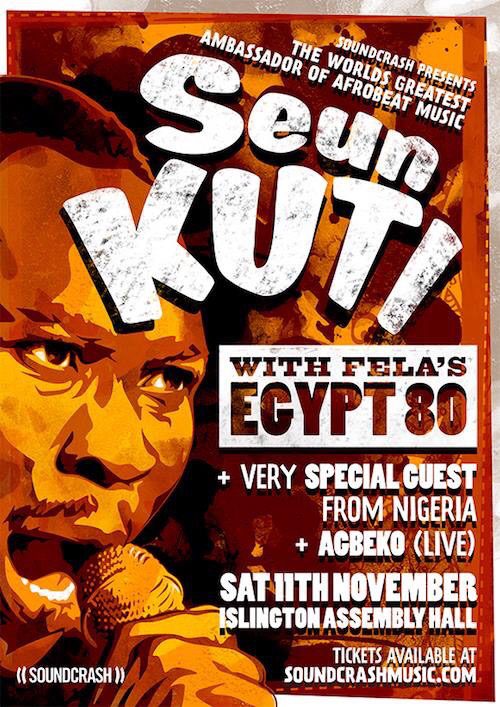 The world’s greatest ambassador of Afrobeat music
Seun Kuti, youngest son of late and great Fela Kuti, will be taking the stage at Noth London’s iconic Islington Assembly Hall for a once in a lifetime rare and intimate show. Egypt 80, the same band that was fronted by his legendary father, will be joining him on stage to get the audience dancing the night away.
After the release of his now renowned album Africa With Fury: Rise, Seun Kuti, who started performing by his father’s side at only 9 years old, proved that he not only inherited his father’s talent, but also his passion and anti-establishment fury. Kuti’s most recent album, A Long Way to the Beginning, has also gained critical acclaim. The songs are faster, harder, beautifully intricate and, as always, defiantly political.
Egypt 80, astoundingly good musicians in their own right, will work with Kuti to deliver explosive power filled with wild, funky energy and deliciously compelling rhythms. Together, they will bring Fela Kuti’s afrobeat legacy to life, all while spinning his classic Afrobeat sound into the modern era.
Agbeko, the Manchester-based 11 piece Afrobeat/Ethiojazz band who specialise in sunny tunes, will also be taking the stage to blow you away with their brassy sound. With the announcement of special guests to follow, this night is set to be the ultimate Afrobeat event of the year.
“You could take the fact that Seun Kuti, not his older brother Femi, heads Egypt 80 as conclusive evidence that he is the baton-bearer for Fela Kuti’s legacy” – The Quietus
Tell someone about this show…

Bust out those earphones! We’ve compiled a playlist of the best Afrobeat has to offer to get you excited for Seun Anikulapo Kuti & Egypt 80 at Islington Assembly Hall.
Get in the dancing mood: http://spoti.fi/2yjrbw2
Tickets moving fast here: http://bit.ly/2g7LQi9