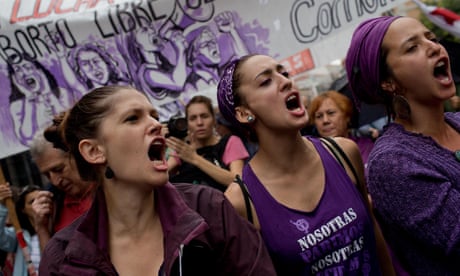 Abortion laws around the world: from bans to easy access

The UN commissioner is asking governments in Zika-affected areas to repeal policies that break with international standards on access to sexual and reproductive health services, including abortion.
“We are asking those governments to go back and change those laws,” said spokeswoman Cecile Pouilly on Friday. “Because how can they ask those women to become pregnant but also not offer them first information that is available, but the possibility to stop their pregnancies if they wish?”
The commissioner’s initiative was welcomed by the US-based NGO the Center for Reproductive Rights.
“Women cannot solely bear the burden of curbing the Zika virus,” said Charles Abbott, the group’s legal adviser for Latin America & the Caribbean. “We agree with the OHCHR that these governments must fulfil their international human rights obligations and cannot shirk that responsibility or pass it off to women. This includes adopting laws and policies to respect and protect women’s reproductive rights.”
This is not the only area of contention sparked by the rapid spread of the virus. Scientists in Brazil are also in disagreement about the significance of new studies – revealed on Friday – that show Zika is present in saliva, which some say should prompt warnings against kissing.
The Fiocruz research institute in Rio de Janeiro said on Friday it had identified live samples of Zika in saliva and urine, which merited further research into whether these two fluids could be a source of contagion.
Until the outcome is known, Paulo Gadelha, president of the institute, suggested pregnant women should think twice about kissing anyone other than their partners or sharing drinking glasses or cutlery with people who might be infected.
Although he said this was “not a generalized public health measure”, the proposed precaution has been met with a mixture of fear and derision. Other scientists argue that it is extremely unlikely for the disease to spread in this way.
“The warning is crazy and unnecessary,” said Rubio Soares Campos, who co-identified the first case of Zika in Brazil. “Just because the virus is present in saliva does not mean it can be transmitted that way.”
He argued that it was more likely to behave like dengue, another mosquito-borne disease that is found in human bodily fluids but cannot be spread that way.
Read more: http://www.theguardian.com/world/2016/feb/05/zika-virus-epidemic-abortion-birth-control-access-latin-america-united-nations